TriHard pets have a total of 7 auto-skill (combat) abilities.
They are the following:
Before unlocking the ability to use one of these auto-skills, you must first have an active TriHard pet guardian. This only happens once you have captured the TriHard hatchery, and you have unlocked the TriHard section in the Loyalty Tree by collecting 50K default faces.
For more information on how to setup auto-skill abilities and apply them to certain heroes, take a look at the Pet Abilities Guide.
In the sections below, we will take a look at some of the best possible strategies with these auto-skill abilities.

The strategy that involves this ability is potentially one of the best ways you can use a TriHard pet guardian.
To start, you want a Hunter with the following auto-skill abilities:
These two abilities will allow you to attack two targets at once, with a 20% chance to stun each of them. Overall, Double Shot gives you a 36% chance to stun at least 1 of 2 enemies that you hit.
When you have a TriHard pet guardian with the Paralyze ability applied to your Hunter, you also have another 20% chance to stun one of two heroes each attack. Overall, Paralyze gives you a 36% chance to petrify at least 1 of 2 enemies that you hit each turn.
In total, with both of these abilities combined, you have a 59% chance to stun at least 1 of 2 enemies that you hit each turn.
This has extremely high crowd control potential, allowing for an insanely effective support Hunter class.
Overall, one very good ability-set to use on a Hunter with this strategy would be the following:
A Hunter with this build will be extremely effective at stunning, petrifying, and freezing enemies. Additionally, the Rebirth ability grants a second life just in case the Hunter is dropped quickly by some crazy multiplier.
The crowd control potential of this build is insane!
This is one of the most effective support Hunter builds out there, and is probably the one of the best strategies to try with your TriHard pet guardian.
This strategy is the same one that was also mentioned in the LuL Strategies Guide. A team with both the LuL & TriHard double stun strategies can have insane potential for locking down all enemies!

This strategy can be used with one of two abilities:
Overall, the point of this strategy is to get a Warrior which is tanky to the point that barely any damage can be dealt to it.
Take a look at the following Warrior ability-set:
This ability-set is potentially the best ability-set for a tanky Warrior. It has the best armor scaling, the best healing to help the Warrior stay alive, and has a ton of additional armor by default.
This tank Warrior strategy intends to improve the tankiness of a Warrior with this ability-set!
If you use the Rugged Defense ability on your TriHard pet guardian, you will have an additional 40% armor on your Warrior which is a huge amount.
A Warrior with this much armor would only really be vulnerable against heroes with a lot of armor penetration.
If you use the Fortified Armor ability, you will be reducing the effects of armor break on your Warrior.
What is the best option?
There is no clear answer as to whether Rugged Defense is better than Fortified Armor or vice versa. They are both very situational abilities.
If you notice yourself stuck on an opponent and that your Warrior is getting absolutely crushed, there is a chance that the enemy heroes have high armor penetration!
In this case, Fortified Armor would be better!
However, by default, Rugged Defense would likely be better because it’s mainly Rogue classes which have armor penetration; and there will only usually be 1-2 Rogues on an enemy team at a time.
With that being said, have Rugged Defense equipped on your TriHard pet guardian and the ability applied to your best Warrior.
Once your pet is a high level and high star, the effects will be quite noticeable!

TriHard pets have a total of 9 unique passive abilities.
They are the following:
These abilities are extremely diverse, offering a wide range of uniquely focused abilities.
As a result, they create two clear strategies that can be used during different stages of the game:
In the next sections you will learn about each of these strategies.

During the Mobile Minigames late-game, battles in the Campaign become far more difficult and expensive to participate in.
As a result of the difficulty in the higher stages, you are forced to wait until you can improve your team, or try to optimize your lineup through other means.
Oftentimes, this involves spending Gems in the following areas:
All of this constant swapping of abilities and talents gets very expensive in the long run. This strategy focuses on improving these Gem costs so that-late game battling can go much more smoothly!
This strategy uses the following TriHard pet passive abilities:
All three of these passive abilities will improve your ability to progress during late-game combat. Since you will likely constantly need to swap out abilities in the Spellbook and talents in Streamer Talents, the Gem cost reduction is a huge deal!
Additionally, it’s even better to do this strategy while you are under the effects of a 10% Gem cost reduction from completing the Gem Event in the prior week.
While not fully necessary, it will help you save a ton of Gems in the long run.
So, this strategy works out to the following steps:
It should be noted that fighting like this is very expensive. Therefore, it's not recommended for free-to-play players since you won’t have a huge stockpile of Gems to begin with.
Most players should simply progress through the Campaign for free, or while working towards completing the Gem Event or a seasonal event. Take a look at the Campaign Guide for the best ways to progress through the Campaign.
If you are a pay-to-play player, you might find this strategy very useful to help you progress through extreme late-game combat stages.
Take a look at the Pay-To-Play Guide for more info on the best Gem purchases you can make.
Additionally, there is one more ability that will improve your ability to progress through late-game combat.
Take a look at the following ability:
The Skin Collector ability simply improves skin buff percentages. This can be great if you have collected a ton of skins and have very high skin buffs to begin with.
Take a look at the Beginner's Combat Guide for a section on skin buffs, and the Achievement Farming Guide for a section on how to collect a ton of skins and increase skin buff percentages.
Overall, by utilizing these abilities during late-game combat, you'll significantly improve your ability to progress further while paying fewer Gems. 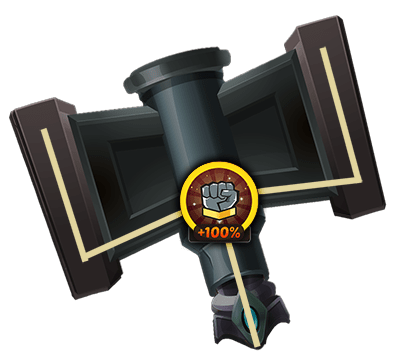